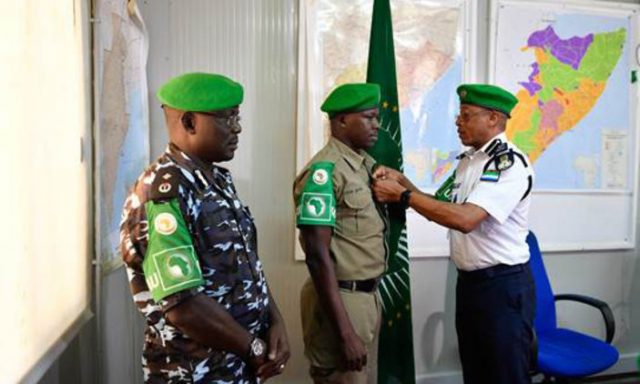 The recognition is a newly introduced initiative by the Police Commissioner, to recognise and motivate Individual Police Officers (IPOs) for their exemplary service in the mission.

The African Union Mission in Somalia (AMISOM) Police component has honoured 15 police officers for their outstanding performance in advancing the mission’s mandate.

The recognition is a newly introduced initiative by the Police Commissioner, to recognise and motivate Individual Police Officers (IPOs) for their exemplary service in the mission.

IPOs support the implementation of the AMISOM Police mandate through training, mentoring, and advising the Somali Police Force (SPF) as well as supporting stabilisation efforts under the Somalia Transition Plan.

Police Commissioner Kailie, paid particular tribute to female AMISOM individual police officers who are involved in the vetting of females who want to join the Somali Police Force.

“We hope this will motivate you to do more,” AIGP Kailie said.

One of the recipients, Sergeant Isha Kanu, from the Sierra Leone Police, said the recognition would encourage her to pursue excellence at work.

“I am encouraged by the recognition, and I promise to perform even better,” said Sergeant Kanu, who is attached to the AMISOM Police Reforms, Restructuring and Development Unit.

Another recipient, Corporal Michael Igumba from Uganda, said it was humbling to be recognised among key players in the Somalia peace process.

“I am happy to contribute to global efforts to restore peace and stability in Somalia,” said Corporal Igumba.